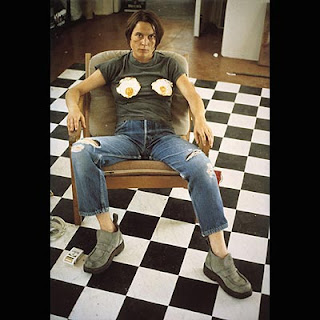 HELLO MY LOVE
JUST PUT THIS LITTLE MASTER WORK ON THE OLD BLOG
TIS THE DAMNED THE BEST ENGLISH PUNK BAND
THE BASH STREET KIDS OF PUNK.
THIS VIDEO BRINGS JOY TO EACH TIME I WATCH IT
ITS THE BEST THING ON YOU TUBE YOU CAN KEEP THE
SKATEBOARDING CATS AND AMY WINEHOUSE BEING CRACKPOTTY
THIS IS WHAT ITS ALL ABOUT PURE SKILL THE MAKING OF SWEET MUSIC
ALSO IF ONE LOOKS CLOSER THE CAPTAIN IS WEARING A TSHIRT THAT
REMINDS ME OF A BRIT ARTISTS FAMOUS MASTER WORK?
ANYWAY MUST DASH
SONGS OF PRAZSE IS ON BBC 1
KISS KISS
ROBERTxx
Posted by robert rubbish at 12:11 No comments:


THIS WONDEFULL VIDEO WAS MADE BY A LADY CALLED ANNE MCCLOY OR SOMEPRODUCT http://www.youtube.com/someproduct
THIS VIDEO IS FLIMED AT LAST YEARS ART CAR BOOT FAIR IN BRICK LANE
WE THE RUBBISHMEN
WHERE ASKED TO PLAY A GIG AND THAT WE DID TO A VERY LARGE CROWD
AFTER ONE SONG A VERY SMALLER CROWD AFTER TWO SONGS A VERY VERY SMALL
CROWD AFTER THaT A FEW MATES.SO AFTER THAT WE TOOK SHELTER FROM THE PUBLIC AND
TOPPED UP OUR LEVELS WITH SOME DRINKS AND THEN WE SAW A KAROKIE MACHAINE AND
DID DO A Libertines classic'Cant Stand Me AND WHAT FUN WE HAD AS YOU SEE I THINK IAM
SUFFERING FROM DAMAGE SUNSTOKE AND LACK OF SLEEP.SO THIS IS MY FIRST VIDEO POST
I LOOK FORWARDS TO BRINGING YOU LOTS MORE
GOOD NIGHT SWEETHEARTS
KISS KISS
ROBERT X
www.therubbishmen.com
www.myspace.com/thelibertines
www.frenchdogblues.com
www.artcarbootfair.com
http://www.myspace.com/someproduct
Posted by robert rubbish at 13:26 No comments: 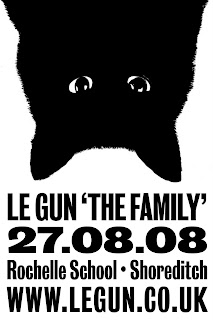 HELLO LOVE EGGS
NEWS ON THE LE GUN EXHIBITION HERE IS A LITTLE POSTER
we will be having the exhibition at the
Rochelle School, Club Row, Arnold Circus, Shoreditch. E2 7ES ...
WE ARE SORTING OUT BANDS AND DJS FOR THE AFTER PARTY
AT CARGO SHOREDITICH
SO WATCH THIS SPACE FOR MORE INFO
www.legun.co.uk
www.afoundation.org.uk/rochelle/
Posted by robert rubbish at 12:21 No comments: 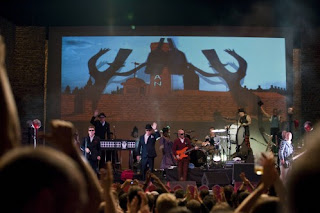 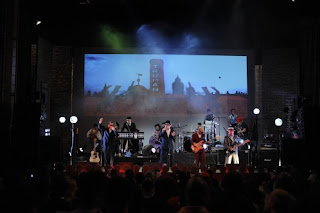 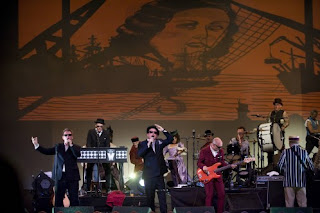 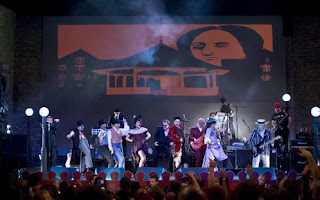 le gun was asked by a group of philanthropists named Madness to produce visuals for their vaudeville inspired show 'The Liberty of Norton Folgate' at the Hackney Empire. We collaborated with Stomp on illustrated, animated and typographic projections and the whole extravaganza was filmed by Julian Temple.
here are some photos of the night with our art work in full view behide the band
cant recall much of the night i think i had had one too many green gins in a green room
in soho before hand
it was good hot and sweaty fun in the heart of hackney
i did meet the man from the crystal maze
you known the one with the bald head
iam sure i must of told him i "LOVED HIS WORK"
thanks to chaz smash for all the drinks and love
he has put our way since we first meet him
many moons ago.
kiss kiss
look out for the long player madness lp 'The Liberty of Norton Folgate'
in all good shops soon

for more madness go to
www.madness.co.uk
www.myspace.com/madnessofficial
www.legun.co.uk
www.stomp.co.uk/
photos by steve from stomp
Posted by robert rubbish at 11:43 No comments: 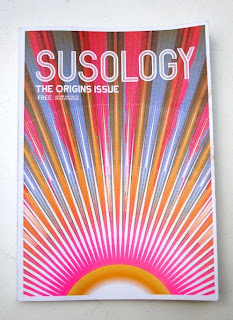 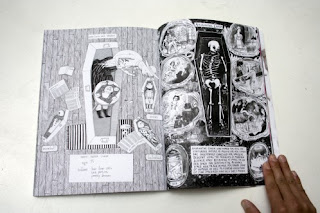 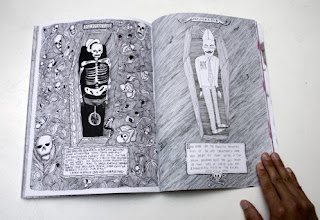 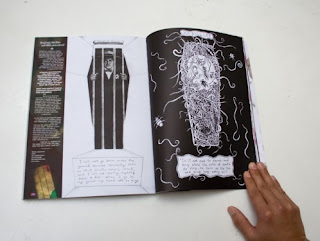 New magazine Susology asked us le gun to contribute some drawings on the theme of 'collaboration' for their first issue. We drew some exquisite corpses, and the original artwork was being showen at Trolley gallery in Shoreditch.
so i drew the man with the crab on his head.
www.susology.co.uk

photo of main wall of exbo at nottinghill arts club

HELLO LOVES
HERE IS A LONG PHOTO OF THE MAIN WALL AT NOTTINGHILL ARTS CLUB
IT IS SMALL BUT IF YOU CLICK ON IT YOU CAN A BETTER LOOK
IAM JUST LISTERNING TO MY FAVE INTERNET RADIO STATION
THAT BEING DEVILS NIGHT RADIO WWW.DEVILSNIGHT.COM GOOD MIX OF MUSIC
SO BYE FOR NOW HAVE A GOOD WEEKEND
KISS KISS
ROBERT X

PHOTO BY CONCETTA GALLO
Posted by robert rubbish at 16:41 No comments:

SOME NEW PHOTOS OF NOTTINGHILL EXBO

HELLO DEARS
HOPE ALL ARE WELL
HERE ARE THE LAST PHOTOS
OF MY NOTTINGHILL EXBO
IVE ADDED SOME DRINK MORE GIN
POSTERS THAT SOON WILL BE ON SALE
AS EDDTIOIN OF 100 LETTERPRESS PRINT
TIS A SHAME THAT THE EGGS FROM THE MANKIN
HAVE DISAPEARED SO IT IS NOW EGGLESS
THANKS TO CONCETTA GALLO FOR THE PHOTOS
TILL THE NEXT TIME
KISS KISS
ROBERT XX
Posted by robert rubbish at 04:06 No comments: 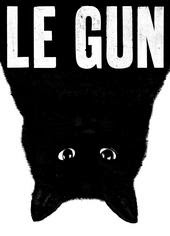 LE GUN issue 4 / september 2008 Issue 4 of the narrative art annual LE GUN will be distributed worldwide from September 2008. The launch will coincide with an exhibition and temporary arts club taking place at the Rochelle School in Arnold Circus, titled LE GUN 'The Family' 'Dear patrons, please charge your glasses and drink heartily for tomorrow you may die' The warped collective imagination of LE GUN presents a dysfunctional family of many generations, including a man with a crab on his head, the leopard walking heiress Marchesa Casati, and the original fat boy actor Joe Cobb. Raised on the the streets of parallel metropolis Legundon, an eccentrically Anglo-Saxon place of loose women, gin and cream cakes, and Francis Bacon's butchers shop, they are an unusual dynasty. LE GUN's gigantic black and white ink drawings record the families journey from their home cities murky streets and dens of vice, across a wild unchartered ocean to an outlandish Interzone of mind bending intoxicants and bordellos, and the jungle funeral of unloved street urchin Caliper Boy. Private View and Launch Party at the Rochelle School, on Wednesday 3rd September from 5pm, with an extended launch party at Cargo till late. Rochelle School Arnold Circus Shoreditch London E2 7ES Call the LE GUN studio on 0208 985 6756 for more information. // The net has been cast far and wide; LE GUN 4 promises a rich and slippery harvest of pictures and words, a catch that includes Polish artist-crustacean Andrzej Klimowski, Will Sweeney, creator of 'Tales of Green Fuzz', visionary draughtsman Paul Noble, and writing from beat generation expert Barry Miles and dandy of the underworld Sebastian Horsley, as well as fresh fruit from young novelist Richard Milward, Ethnographic writer Iain Sinclair and the 'Hunter S Thompson of Hartlepool', Michael Smith. Added to these afore-mentioned are the less well known but equally delectable new voices that have been chosen for fullness of flavour and keenness of eye... The result is vivid story of stories and stands as an independent work in its own right; somewhere between pulp fiction and an artist's edition. Undigestible in one sitting, this confection asks to be treasured and revisited... ...................................................................................................................

OK LOVE EGGS
THATS WHATS
GOING ON
WE WILL BE UPDATING
INFO AS IT COMES
SO ITS LOOKING LIKE THE 27TH OF septmber
WILL BE THE OPENING THEN AFTERPARTY
WITHS BANDS AND DJS AT CARGO
NOT SET IN STONE YET
SO IF YOU CAN MAKE IT
PLEASE COME ALONG
KISS KISS
ROBERT X
Posted by robert rubbish at 07:28 No comments: 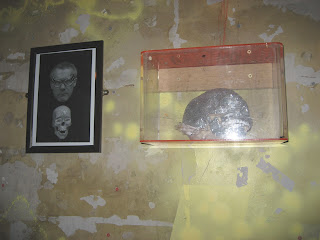 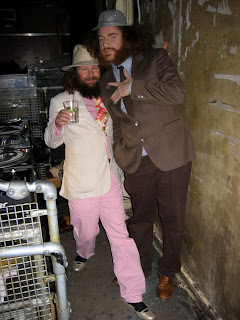 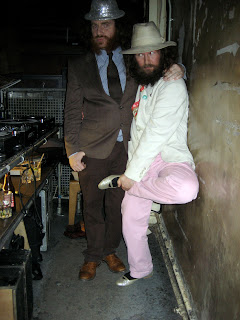 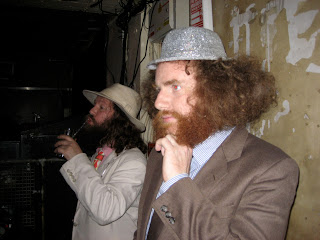 HELLO DEARHEARTS
TIS ME AGAIN MR RUBBISH JUST UPLOADING SOME NEW PHOTOS FROM
LAST FRIDAYS EXBO AT THE NOTTINGHILL ARTS CLUB HERE ARE SOME NEW ONES
LOTS OF THE RUBBISHMEN DJING IN A PETER TONG STYLE LOTS OF BACK SPIN
AND MUSH UP IN A REGGIE STYLES IAM LOVING GARCIAS PINK JEANS
THEY ARE JUST TO DIE FOR A MUST HAVE FOR THE SUMMER SEASON ME THINKS
AND WITH LADY BATHS GLITTER SHOES OH I SAY GIVE ME MORE O.M.G
A STYLE LORD IN DE AREA
SO NOT MUCH MORE TO SAY JUST HAVING A LAZY SUNDAY AFTERNOON
LOOK OUT FOR UPDATES COMING SOON ABOUT THE LE GUN 4 EXBO
AND AFTERPARTY
BUT TILL ME NEXT POST
GOOD BYE
AND BEST WIHES
KISS KISS
ROBERT X
Posted by robert rubbish at 08:18 No comments:

Posted by robert rubbish at 18:03 No comments: 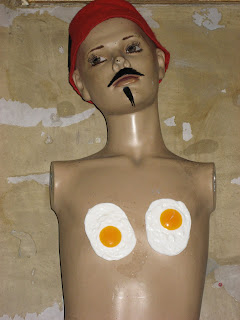 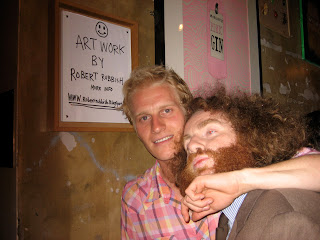 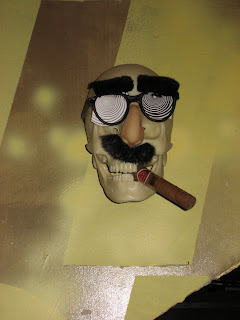 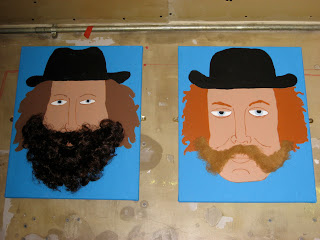 HELLO LOVE EGGS
HERE IS SOME MORE PHOTOS OF FROM THE EXBO
THANKS TO ALL WHO CAME SAW AND DID HEAR
THE RUBBISHMEN DJ SET. WE HOPE TO DO MORE DJ SET IN THE FURTURE
SOO KEEP AN EYE OUT
SO THATS ALL FOR NOW
SWEET DREAMS
KISS KISS
ROBERT XX
Posted by robert rubbish at 17:42 No comments: 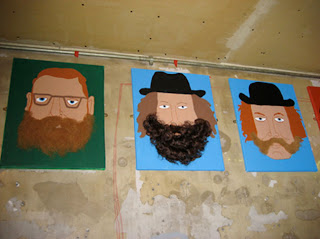 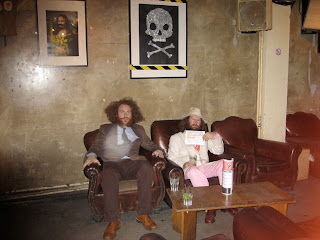 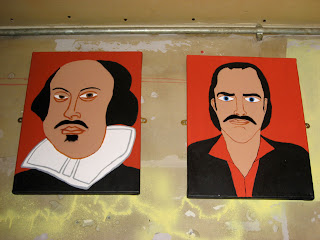 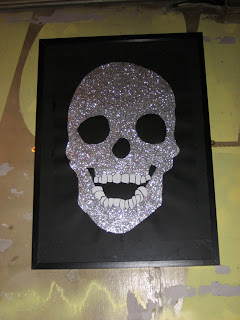 HERES SOME PHOTO OF EXBO
THANKS TO MISS NINA FOR THE PICS
Posted by robert rubbish at 17:38 No comments:

A TRIP TO BRISTOL 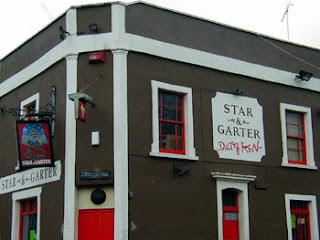 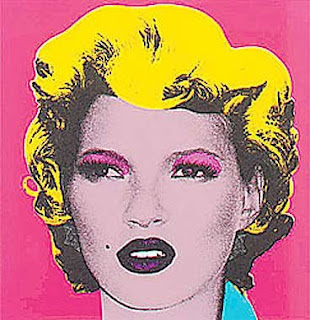 IT DID COME TO PASS THAT I DID TAKE THE TRAIN TO BRISTOL THIS SATURDAY TO SEE FRIENDS AND FAMILY
IT WAS WAS A WONDERFULL TRIP AWAY FROM LONDON REVISTING SOME OF MY OLD WATERING HOLES
MEETING NEW PEOPLES AND OLD FRIENDS MOST OF SATURDAY WAS SPENT IN THE STAR AND GARTER
A WONFULL LITTLE PUB MUST POP DOWN TO OLD BRISTOL MORE
ITS A REAL TONIC FROM THE TOO COOL FOR SCHOOL SKINNY JEANED
NOBERS OF LONDON.HERE IS A BANKSY PICTURE DONT UNDERSTAND ALL THE FUZZ ABOUT
HIM THERE WHERE PEOPLE SNAPPING AWAY AT SOME BIT HE HAD ON A WALL IN STOKESCROFT
I DID SEE SOME GOOD GARFFITI IN BRISTOL ON THE SIDE OF A HOUSE THAT READ IN BIG SHAKEY LETTERS
"IF YOU READING THIS YOUR GAY" LETS BRING BACK THAT SORT OF STUFF.
ANYWAY MUST DASH TO MEET A JONNEY DEPP LOOK ALIKE
BYE FOR NOW
BEST WISHES
ROBERT
KISS KISS
Posted by robert rubbish at 07:19 No comments: 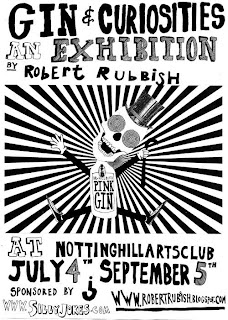 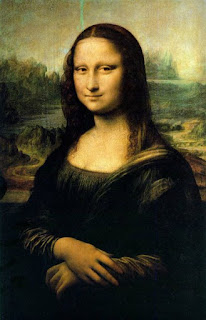 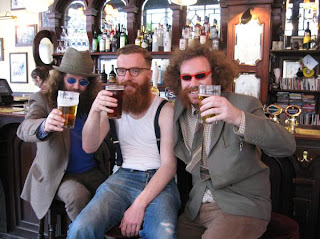 COME ON DOWN ON FRIDAY FOR FUN AND FROLLICKS
AT THE NOTTINGHILL ARTS CLUB 6 ONWARDS
HEAR THE RUBBISHMEN DO A DJ SET
WILL UPLOAD SOME PICTURE WHEN ITS ALL UP
MUST DASH DIY SOS IS ON TV
KISS KISS
ROBERT XX
Posted by robert rubbish at 17:59 No comments: