HERE ARE SOME PHOTOS I TOOK ON BOXINGDAY 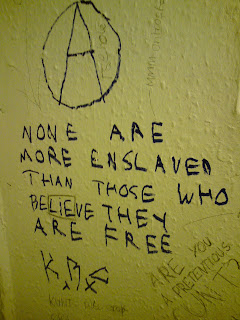 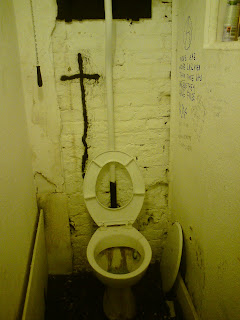 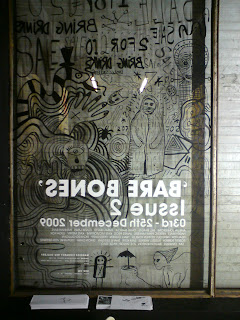 Hello all out in cyberspace
here are some photos i took
at the bare bones shhow
neu galleries redchurch street
i think the show is still on
and there might even be a sale
so if in that part of town come on down
bye for now
kiss kiss
xx
Posted by robert rubbish at 02:54 No comments: 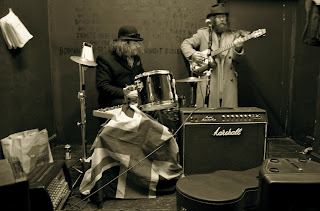 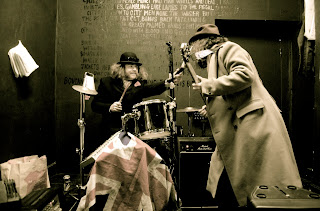 Helllo one and all
here are some photos from
thursday night where the
rubbishmen played a live giglet
twas a cold snowy night and we did
play all our hits and then a an oncore
of freerange : kraut rock
the bare bones exbo is on till
christmass eve so if in the area
go and check it out there is a link below
also there is a link to our new video
thanks to ja ja for the photos
till next time
best wishes
robert
xx


As 'tis aforementioned in the title. 'Tis that time of year.

We wish thee cheers me dears, 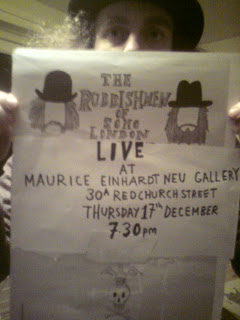 Hello loves
the rubbishmen of soho to play
a gig this thursday at the
neu galleries redchurch street shoreditich
we will be playing at 7.30 ish
if about please come on down
if your about
best wishes
robert xx
www.therubbishmen.org

Posted by robert rubbish at 11:32 No comments: 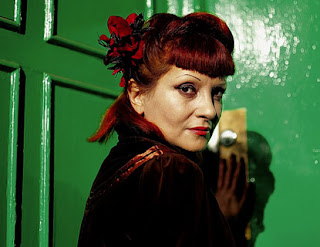 
For the past 30 years, writer and DJ Princess Julia, 49, has been partying hard in Soho, including a 15-year stint living on Dean Street and Berwick Street.

A night owl, she jokes that she could literally roll out of bed at 11pm and walk across the street to work.

Given her distinctive association with W1, it's not surprising her face is on the cover of the newly published book Soho Lives, a veritable love letter to the West End's most interesting enclave and its inhabitants, both past and present.

Her favourite tips include club night The Trannie Shack at Madame Jojo's on Wednesday nights and
the new 'Circus' in Endel Street run by Dick, the former barman at the Atlantic Bar and The Colony Room.

"Soho has always had that seedy element, which I find really attractive," she says, "though you do have to look harder to find it these days. But there's still a scene around Old Compton Street, with all the gay bars."

As music editor of i-D magazine and co-editor of The P.I.X music zine (recently namechecked by the New York Times), Julia spends a lot of time in the record shops of Berwick Street, such as Sister Ray. "And on Tuesday nights at Madame Jojo's they have White Heat, where you can find a lot of new indie bands."

She prefers to mix vintage and modern clothes, so Beyond Retro is another favourite. And her friend runs the tattoo parlour on Frith Street just beyond Bar Italia.

"Since I was a child, I've always thought Soho was magical," she recalls. "I was born in Hackney and grew up in north-east London. My dad is Hungarian and in the Sixties we couldn't get any of his favourite foods. So once a month we'd go to Soho to shop in the wonderful Italian delicatessens such as Lina Stores on Brewer Street. You couldn't get fresh pasta anywhere else."

She lived in Bloomsbury and off Regent Street in her twenties but became a fully-fledged Soho inhabitant at the age of 30.

"The Colony Room was my local: they actually made me an honorary member. I'd go and meet Pam Hogg and then we'd go clubbing afterwards."

But then Princess Julia has history. One of the first-ever female DJs, she came to notice as a Blitz kid in the early Eighties, along with Marc Almond and Boy George. She was a resident DJ at the legendary Kinky Gerlinky nightclub and appeared in Visage's 1981 Fade to Grey video.

When the director Baillie Walsh was shooting Boy George's controversial 1990 pop video Generations of Love in Soho, he persuaded her to play a key role. Along with fellow "club celebrities" such as David Holah, Les Child and Sue Tilly (who went on to model for Lucian Freud), she was cast as a young prostitute in the streets of downtown London.

"We shot it in Raymond's Revue Bar and around the pubs and clip joints of Old Compton Street," she recalls. "We couldn't get permission to shoot in Old Compton Street so we hid in my friend's hairdresser's until the coast was clear, then ran out and filmed until they told us to stop. Leigh Bowery was the stylist. I was in a leotard. I wasn't allowed make-up - just Vaseline on my face. Look it up on YouTube - it really captures what Soho was like."

She's seen a lot of changes over the years. The Colony has gone. They've bulldozed the Astoria, along with clubs such as The Ghetto - where she used to DJ - to make way for the new Tottenham Court Road station. "Soho is mostly bars and theatreland these days," she says, but she approves of the new posh members' club at the top of Centrepoint.

And she loves the way you can turn a corner and bump into a leading advertising creative, then around the next come The Rubbishmen - Soho's Victorian punk revivalists. "They're quite natty dressers with big beards and tweed suits, and they have this shambolic band.

"I travel around the world a lot. Williamsburg in New York, Plastic in Milan," she continues. "A lot of Brits are moving to Berlin but there's nowhere like London, that's why I stay here. And Soho is the true original. It has this fabulous balance of art, music and fashion - everything melds and flows together.

"Plus we have the best café life. You can literally hang out on the streets, or sit and people-watch. You bump into everyone in your life if you stay here long enough."
Posted by robert rubbish at 02:22 1 comment: 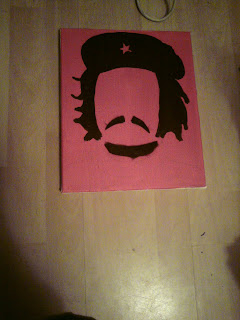 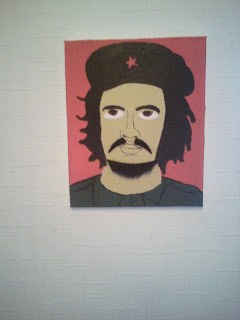 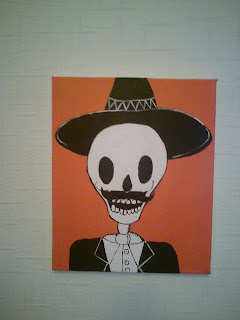 Hello one and all
hope all are well
on this grey monday
here are some new
painting
the red one
is my take on
Ernesto "Che" Guevara (Spanish pronunciation: [erˈnesto "tʃe" geˈβaɾa]; June 14,[1] 1928 – October 9, 1967) commonly known as Che Guevara, El Che, or simply Che, was an Argentine Marxist revolutionary, physician, author, intellectual, guerrilla leader, military theorist, and major figure of the Cuban Revolution. Since his death, his stylized visage has become a ubiquitous countercultural symbol and global insignia within popular culture.[4]
the is a before and after photo
and the orange one is a mexican
bandit skelton
bye for now
best wishes
robert xx
Posted by robert rubbish at 06:17 No comments: 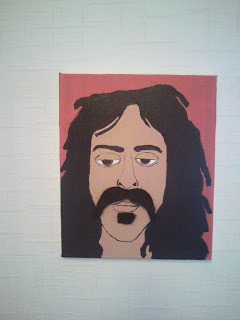 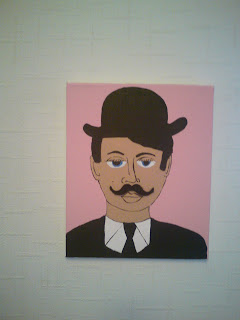 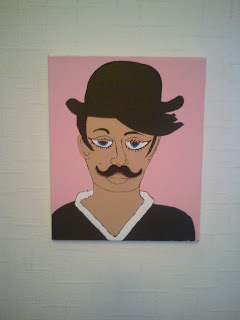 Here are some new paintings
the pink ones are called
mr and mrs smith
and the red one is my take of
frank zappa
bare bones exbo
is now on check out
link for details
http://www.quarterlybarebones.blogspot.com/
kiss kiss
robert xx
Posted by robert rubbish at 03:33 No comments: 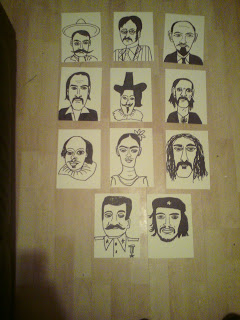 Hello out there
here are some drawings
i have made for the bare bones
exbo that is starting to night
at The MAURICE EINHARDT NEU GALLERY
redchurch street
for more info go to
www.quarterlybarebones.blogspot.com/
kiss kiss
robert
xx
Posted by robert rubbish at 03:24 No comments:

photo i took on brick lane 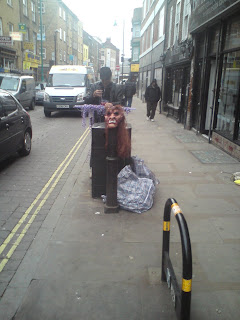 Here is a little photo
i took on bricklane
last week
xx
Posted by robert rubbish at 11:33 No comments: