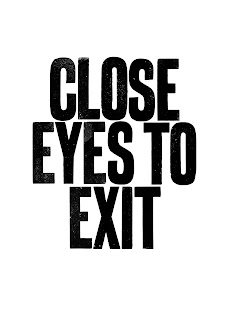 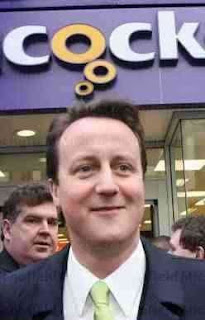 hello all
this image was sent to
me by paul v lawford of
soho and east sussex
thanks its great
kiss kiss
x
Posted by robert rubbish at 07:13 No comments: 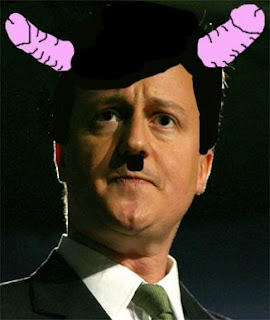 Posted by robert rubbish at 02:18 No comments: 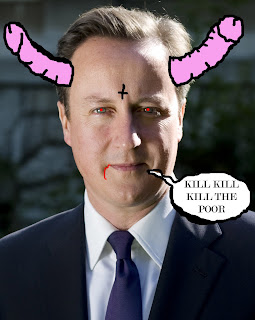 Posted by robert rubbish at 13:42 No comments: 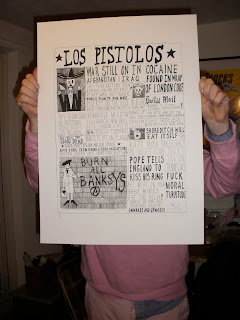 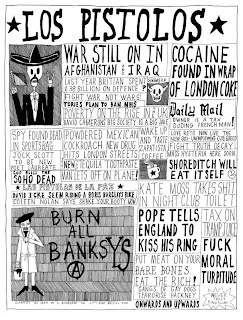 Hello one and all
i have a new Screen print
for sale its from an edition
of 50 and is £55 including
postage and packing its
black on white paper and is
A2 in size if you would like
to buy one email robertrubbish@gmail.com
best wishes
robert xx
Posted by robert rubbish at 04:24 No comments:

the big society whats it all about dave ???? 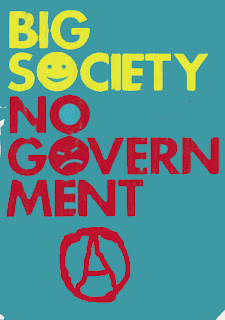 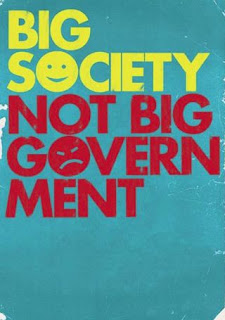 Hello hope all is well
out here in cyberspace
tomorrow David Cameron
will bang on about his big Society
still no one knows what it is about
so dave we tell us more about it this
week and then we can all live as one
happy society
bye for now
kiss kiss
robert
xx
Posted by robert rubbish at 02:59 No comments: 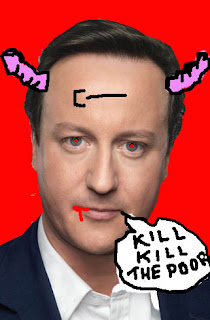 Posted by robert rubbish at 04:57 No comments:

The Paper House Project, 2011 in jersey this weekend 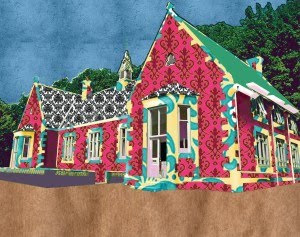 The Paper House Project, 2011
Group Exhibition
St Brelades College, Jersey
Saturday 12th February (5.30pm – 9pm) – Sunday 13th February (10.30am – 5.30pm)
For just one weekend St Brelades College will be hosting an artistic extravaganza guaranteed to inspire with Paintings, Sculptures, Photography, Glass, Installations, Performance Art and numerous surprises that challenge tradition and showcase the unexpected.
The exhibition will feature works by over thirty talented local artists.
Live music and refreshments can be enjoyed in the quirky ‘pop up’ Victorian Tearoom where you can meet the Artists. The Project has been put together by two local Artists, Joanna Brown and Louise Evans.

S CLAY WILSON IS UNWELL you can help him 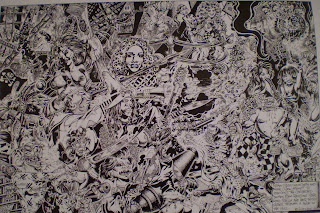 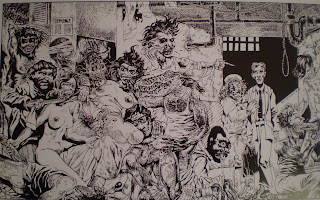 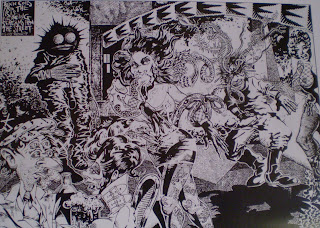 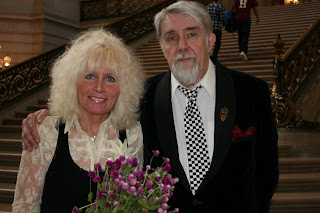 S clay wilson is one of the best
60s underground comix artists
he is ill from a fall he had in 2008
as he lives in the land of the free
he has to pay for all his medical care
so there has been a trust set up to
help him for more info see below
and if you can help go on the website
his artwork rocks he was very punk before
punk and some of it is still shocking
even today www.sclaywilsontrust.com
bye for now
kiss kiss
xx

S Clay Wilson was trying to get home from a friend’s house November 1, 2008, the night his life changed. We will never be certain if he fell or was attacked, since he has no memory of it. The numerous injuries on his face and head made him look like he was beat up. Two good samaritans found him unconscious between parked cars, face down in the rain, and called an ambulance. (I have tried to find them in order to express my gratitude for saving his life, but have had no success.) He’d suffered a Traumatic Brain Injury, bleeding in three hemispheres of his brain. He spent three weeks in a coma, and we had no idea how severely impaired he was for many months. Once he began to speak again we realized he hadn’t just “awakened” to resume life as it had been before.

We’d been flirting since we met in 1968. I have been living with him now for ten years, visited him every day for the year he was in the hospital, and brought him home to take care of November 10, 2009. This is a daunting task, but one I am devoted to.

The days he spends drawing are his happiest, but I don’t nag when he chooses not to work. He has done about 15 drawings since last summer, and still has incredible talent. He loves movies, so we haunt the libraries, renting up to 20 at a time. We usually begin viewing them in the late afternoon. We exercise every day, take walks, and friends sometimes take him to lunch, museums, or art shows.

He is very quiet now after being a motor mouth all his life. But he is not a blank slate. His short term memory is shot, and with aphasia, often has trouble expressing himself. (I frequently “put words in his mouth” to help him but he’s usually able to tell me if I got it wrong.)
I have put together a Special Needs Trust for him since he is no longer capable of earning a living. He will need 24 hour care from now on since the little details of daily life are a mystery to him now, and he is easily confused. This gifted artist worked as hard as he partied and was a playful, brilliant person. Although he is still capable of worrying about the future, he does not fully understand what has happened to alter it. He is now in need of help. This is a tragic turn of events for a proud man.
The Trust is set up so it can only be spent on him. We pool our meager resources for basic expenses. I hope people will find a way to donate what they can to give him a better quality of life and assist in his ongoing care.
The address of the Trust is www.sclaywilsontrust.com
Or mail to PO Box 14854 San Francisco CA 94114
Thank you!
Lorraine Chamberlain
Posted by robert rubbish at 12:45 No comments: 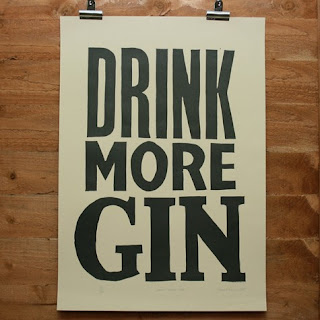 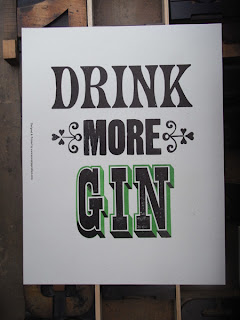 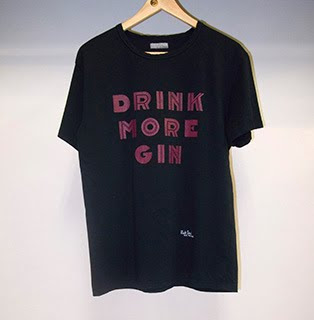 www.rsw1999.com/collections/ 2011_ss/index.html
Hello one and all
here you can see how
my DRINK MORE GIN
print is being ripped off
by some peoples out there
its not nice to be ripped off
i known what came first
and it was my print
so a big no thanks to
stephen kelly at atwopipeproblem.blogspot.com
and who ever the tshirt one is by
heres a link to there site www.www.rsw1999.com/collections/ 2011_ss/index.html
bye for now
kiss kiss
xx
Posted by robert rubbish at 07:58 2 comments: 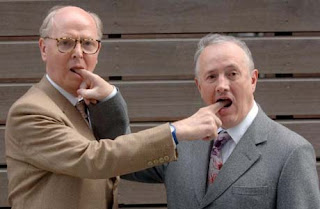 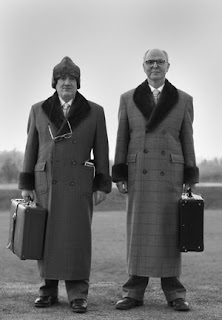 www.bbc.co.uk/iplayer/episode/b00yb5xz/Mark_Lawson_Talks_To..._Gilbert_and_George/
Posted by robert rubbish at 04:42 No comments: 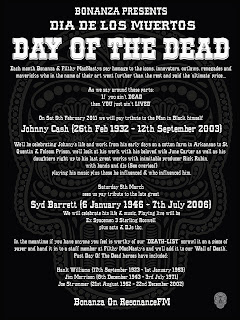 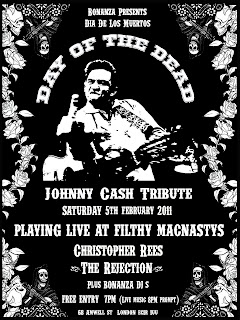 Bonanza Presents:
Hello out there
heres a flyer for a
great night thats on this
saturday and the first saturday
of every month this week is
the johny cash special
please read below for more
info
bye for now
kiss kiss
x
'Dia De Los Muertos'... 'Day Of The Dead'

FIRST SATURDAY OF EVERY MONTH

Each month Bonanza & Filthy MacNastys pay homage to the icons, innovators, outlaws, renegades and mavericks who in the name of their art went further than the rest and paid the 'ultimate' price...

As we say around these parts:

'If you ain’t DEAD
then YOU just ain’t LIVED'

We'll be celebrating Johnny's life and work from his early days on a cotton farm in Arkansas to St. Quentin & Folsom Prison, we'll look at his work with his beloved wife June Carter as well as his daughters right up to his last great works with inimitable producer Rick Rubin.

with bands and djs (See below)
playing his music plus those he influenced & who influenced him.

We will celebrate his life & music...Playing live will be Ex 'Spacemen 3' member Sterling Roswell plus acts & DJs tbc.

Past Day Of The Dead heroes have included:

Christopher Rees:
Bonanza is very proud to present Christopher Rees who has been making and shaking of late following acclaimed support slots with Steve Earle, Chuck Prophet, The Sadies and The Handsome Family as well as performances at South by South West 2010 in Texas.

Chris has promised a healthy offering of Johnny Cash cover versions tonight as well as highlights from his own critically acclaimed album 'Devil's Bridge'. He will also showcase brand new tracks from his, as yet, unreleased follow up 'Heart On Fire'.

The Welsh Music Awards Best Male Solo Artist will perform his grim, portentous narratives and shadowy secrets; his previous album was not called 'Cautionary Tales' for nothing!...

Rees is also the first and only act in over a decade to support former Velvet Underground legend John Cale as well as having performed a number of national radio live sessions for the likes of Janice Long on Radio 2, Radio 1s Evening Session as well as live sessions on London's best radio station Resonance104.4FM.

Following his appearance at SXSX plus an extensive 'field trip' in the deep South of America, Rees has taken the original themes, mood and music of his previous album and produced a work of both authentic charm and stunning originality that is truly breathtaking in such a short space of time.

Expect Post-Country, banjo-picked parables with an eeriness and gravitas that makes 'Deliverance' look like 'Babes in The Wood'. 'Don't have nightmares now!'

'From that first track I was hooked; his delivery, there's a depth, a roughness that goes with that melodic suss... In the next few years I think he'll develop even more and when you bear in mind where he's at now, that's pretty scary': Phil Alexander (Editor in Chief - MOJO)

+ The Rejection:
This newish project from Jeremy Mendonca of Norton Money are fast proving themselves to be a sterling, class, live act.

Come gather round people wherever you roam and experience the truly exquisite and authentic harmonies from a truly international trio ranging from a San Franciscan, Bay Area 'cat', Swedish Banjo-plucker and a sweet-voiced, English maiden on bass.

These guys are delighting audiences all over Londinium with their laid back, psychedelic take on Country and Americana, Also expect the addition of more Country-Rock 'N' Roll-like interludes, heart-lifting, cosmic-barnstorming and introspective folk elements to their live performance.

The last time these guys took to the Bonanza stage they rocked a packed house with their upbeat, West-Coast harmonies and tripped-out bitter-sweet Post-Country lyrics... Expect them to raise the roof tonight with barn-storming renditions of some Johnny Cash classics as well as their own inimitable compositions.
www.myspace.com/jeremymendonca
www.facebook.com/pages/The-Rejection/167400439951564

Posted by robert rubbish at 06:32 No comments: 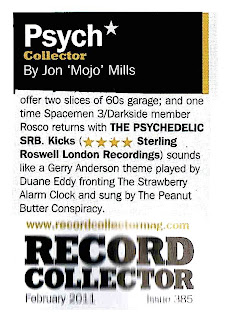 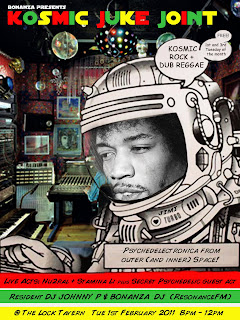 'Psychedelectronica from outer (and inner) Space!'


Imagine a Juke-Joint deep in space and you'll be not quite so close to the premise of Bonanza's night The Kosmic Juke-Joint...

So expect all manner of bands, Djs, artists, curators, dancers, writers, poets and performers tracing the roots and subsequent influence of the Blues into Psychedelia and the history of the droning, analogue synth, right through to glitchy, computer-based electronica and sampleadelia... and a lot more from ten decades of astounding sounds!

If pre-war, down-home, Mississippi Blues next to great slabs of monolithic Krautrock or underground rock-tronica doesn't seem wrong to you plus the latest, cutting-edge acts live on stage then you'll love it...

Nu2tral & Stamina Li:
Universal Dub Reggae and mashed-up cosmic hip-hop with a new message of hope, peace and respect resonating from the streets of Hackney.
Both are Poets,Toasters and story-tellers who create a fresh and diverse blend of Reggae ranging from space-out dub to upbeat Ragga.