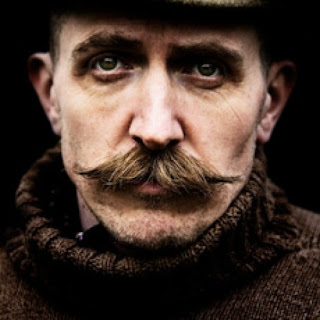 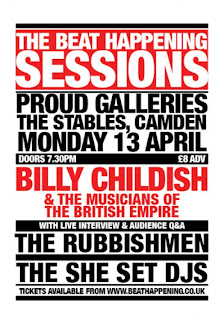 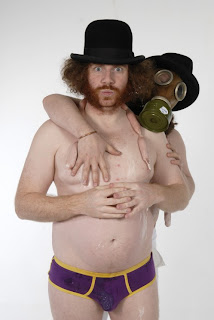 
HELLO LOVES THE RUBBISHMEN
ARE GOING TO BE THE SUPPORT ACT FOR
MR.BILLY CHILDISH
ON MONDAY THE 13TH OF ARPIL AT THE
PROUD GALLERY CAMDEN
PLEASE COME DOWN IF YOU CAN MAKE IT
THE NIGHT GOES ON TILL 4 OCLOCK IN THE MORNING
ABOVE IS A VIDEO OF MR.CHILDISH
BYE FOR NOW
BEST WISHES
KISS KISS
ROBERT X
BILLY CHILDISH & THE MBE LIVE SET AND INTERVIEW

+ THE RUBBISHMEN
+ THE SHE SET DJS

Hot on the heels of the Beat Happening Bash, which in 2009 saw the likes of Micachu & the Shapes, Chrome Hoof, Screaming Tea Party, Art Brut, Capitol K, Goldielocks and Bearsuit performing or spinning tracks at their monthly events at the Camden Monarch, comes the Beat Happening Sessions. Following the event’s successful launch, which saw Pete and the Pirates take to the stage for an acoustic set and live interview, The Beat Happening is proud to present the latest instalment in the shape of a true British cultural icon, in the shape of wildly prolific painter, poet and garage rock musician, Billy Childish.

The Beat Happening Sessions concept is simple: the band performs a live set, and then the writers of Beat Happening magazine interview the band on stage. Following the interview is a live audience q & a. What makes your favourite band tick? What inspires their lyrics? What do they prefer, jam or marmalade? Ask them yourself at the Beat Happening Sessions. The added twist is that the interview will then be published on www.beathappening.co.uk, the online blog which in the past year has seen its pages adorned by the likes of Nick Cave, Mars Volta, Battles, Brian Jonestown Massacre and The Dandy Warhols.

The night’s headliners are Billy Childish & The Musicians of the British Empire. Billy Childish is one of those rare things: a legend worthy of the title. Having published over forty anthologies of poetry, and founded the stuckist art movement, he has proven to be an inspiration to many luminaries of art and music; Kurt Cobain, Beck and even Kylie Minogue have cited him as an influence, and Jack White famously scrawled Billy’s name on his arms when performing with the White Stripes on Top of the Pops. With a countless number of releases, with various different bands (including Thee Headcoats, Thee Milkshakes and The Buff Medways), he has firmly established himself as one of the most important British artists of recent times. His latest band, the MBE, typifies his usual DIY garage rock approach. The band will be performing, following a live on-stage interview, and audience Q & A with Billy and the band.

Support comes from ‘Victorian punk revivalists’ The Rubbishmen. With a decidedly lo-fi ethic, heavy emphasis on tweed, and ramshackle songs about nights on the gin in the members clubs of Soho, you can expect laughs and musical incompetence galore. Rounding off the bill are East London’s favourite DJs, The She Set, who will be spinning an array of obscure garage rock, doo-wop and 60’s R n’ B numbers throughout the night.

Tickets are £8 and available from www.beathappening.co.uk

NB. To partake in the audience Q & A, you MUST first email your question, to info@beathappening.co.uk. You must mark the subject as BILLY CHILDISH Q&A, and also give your name and ticket booking reference in the email.