THE DAY THE RUBBISHMEN PLAYED WITH BILLY CHILDISH 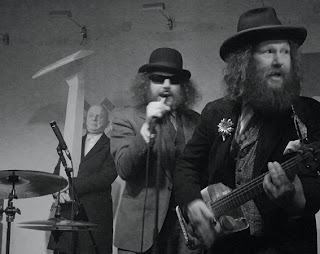 This photographic plate, that which sits above this here text shows the impending doom, that which was the end of our gigl’et with the artist, poet, musician that being Mr. Billy Childish and his band, that being the musicians of the British Empire. The gig did take’th place in the location of outer the square mile of Soho and the regions of Westminster in a small shire of London calling itself Camden town. This town was more of a festering catwalk for the youth, in their many forms of get up: Skinny legged jeans, plimsolls, hooded sports wear, gothic types, punkets, not Victorian punk revivalist may we add indeed, and even we dare to say it STEAM PUNKS . We did load our equipments from the Hackney carnage and did make’th our way to the venue witch was a art exhibition space and an old hospital for horses to boot. Mr childish and his gang did turn up and did start to build a public announcement system that hailed from the 1960s after a sound check and a couple bottles of complimentary American larger drinks. The venue did fill up a little, and before long we where ushered to the stage by a sound engineer. We took to that stage and went at it like we where hell bent for leather whipping and wooing the crowd into a light frenzy. We delivered all our greatest hits and near misses. Then we knew there wasn’t a deaf in ear hole in the house we delivered a damming blow to that false’dom that is STEAM PUNK

"And with this mighty chord I end this that which calls itself Steam Punk, history will absolve us!" The audience grasped and then went on brave as punch and as bold as muck. We where than joined on the the stage by Sir William Blake the 300 and something year old poet now turned gas fitter/plumber who was sporting full period wig and he did perform with us our mini rock opera "The Golden Gin Riots." After this we did announce it was our final number and did perform the classic libertines cover that being "What you going to do peaty" dedicating the song to saint Peter Donutty, we where now on fire and things where going well, we where nearing the end of the song when a cold chilling feeling came upon us. Cripes! we exclaimed t’was Herman Mandrake who had forced his way into the venue and aon to the stage he was wielding his six foot Bic razor in the direction of us the Rubbishmen we had no choice but to take our leave and run for our lives. And so the gig was over we run all the way back to Soho and locked ourselves in our wheelie bin. Thus missing the performance of Mr. B Childish and his band and the cash money for payment loo for our services. We where latter told that there was a live Q and A with Mr. B Childish and some brave soul in the crowd propositioned him with the question of "What do you think of the Rubbishmen of Soho London?" It is said that he replied with; “Well erm … they sort of put me in mind of er … Morecambe & Wise, yea it’s sorta’ whatd’ya think of it so far … Rubbish … sort of thing … does that answer your question? No, came the reply.

So that is the story of the day we played with Mr. Billy Childish.