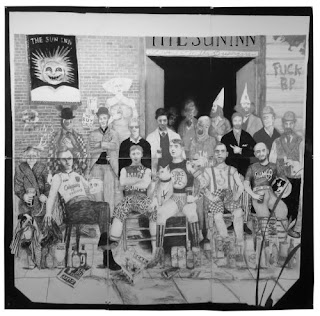 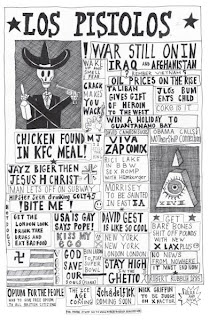 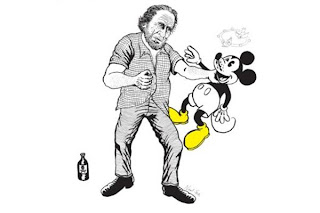 it's been one year since The Dazed Gallery hosted the first exhibition by Bare Bones, the kick-against-the-pricks London-based zine that features contributions from some of the most exciting young creatives on the block. The title has since gone from strength-to-strength, garnering a growing number of converts to its provocative image-based anti-everything editorial style. This month witnesses the title go global with the first ever New York issue. We headed into one of the seedier corners of east London with Harry Malt, the self-professed captain of their motley crew, to talk genital mutilation, beating up on Mickey Mouse and publishing the last piece of writing by the late Sebastian Horsley.

Dazed Digital: How has Bare Bones evolved since your first exhibition at The Dazed Gallery?
Harry Malt: It has grown a lot, we've doubled our number of contributors and we also have real editors working for us now, Niall O'Brien does all the photos, the giro playboy Michael Smith sources the writers and Matt Lambert does the moving image stuff.

Dazed Digital: What has been the most memorable Bare Bones opening event?
Harry Malt: All of our events are memorable for some reason – drunkenness, police, live performances... I think that seeing a guy smash his nut sack in a rat trap after his girlfriend extracted a four-inch nail from his jap's eye has to be one of the most memorable happenings. We had two bands play the after party in New York: Jugger Nut and Giggle Fits. They were jaw-droppingly good. Every time we do a show we try to mix things up a bit, this one in New York was off the scale.

Dazed Digital: What are you doing to make this a New York specific issue?
Harry Malt: We set a very loose 'US' theme. Neal Fox gave us a drawing of Charles Bukowski beating up Mickey Mouse, and Robert Rubbish did a Los Pistolos page especially to do with the US. I think it would be best if I say I love it as a whole, not as individual pieces.

Dazed Digital: What are your long-term ambitions for Bare Bones?
Harry Malt: I'd like to see Bare Bones printed and published in different cities across the world, and we're looking into having it printed in different countries at the moment. It could be released on the same day everywhere, and become a resource for people to find out about art and artists.

Dazed Digital: And you have a contribution from the late Sebastian Horsley?
Harry Malt: Yes, it's sad but it's a privilege. He wrote a piece for us based on his expulsion and subsequent banning from the US for 'moral turpitude', whatever the hell that is. I think they'd got a copy of his memoirs and had obviously deemed him a threat to the moral fibre of their country. It's a wonderfully written page on his dealings with the US immigration officers, to whom his only concession was removing his nail polish. He wasn't bitter about it.

Dazed Digital: What has the reaction been to Bare Bones in America?
Harry Malt: It seems to have worked well so far. We had a really positive reaction from the show at Envoy, I think they get the Britishness of it. Some people I've spoken to about the scene over in New York are a bit disparaging about it, saying it's conservative and all that.I don't think you can generalise about it. We have it stocked in Envoy, Cinders galleries and Opening Ceremony.I think it works on both sides of the atlantic. It's just good to get new people to see it, and to see how they react.

Dazed Digital: What is next for Bare Bones?
Harry Malt: A London/New York gallery space, international editions and more colour. We are also setting up an online folio site for all our contributors,and a dedicated tropical office for special projects. I'll be managing that. Basically, we want more fun, more publications, more travelling, more shows, more people... more living the dream.

http://www.dazeddigital.com
Posted by robert rubbish at 05:06