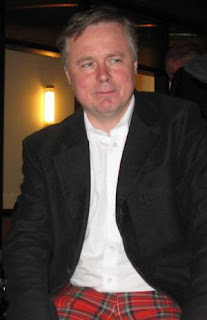 Hello one and all
last eve i did go and see
a play written by my mate
larry lynch it was very good
well done mr.lynch also good
to see a good turn out of some of
sohos finest its on till the 3rd of sept
bye for now
kisses


A WEST End plumber has taken the plunge and started a new career as a playwright.

A production of Soho resident Laurence Lynch’s first play, Burnt Oak: Life and Death in London Town, will open next month at the

Leicester Square Theatre – a venue for which Mr Lynch once did the plumbing.

He told the West End Extra: “This sort of thing doesn’t normally happen to someone who unblocks urinals for a living. With the lack of arts funding, I feel incredibly privileged that this has happened to me.”

Set in a council flat in Burnt Oak, the area of London where Mr Lynch lived before moving to Soho more than 20 years ago, the play will be directed by Mr Lynch’s friend, Nathan Osgood.

It is based on the experiences of the playwright and his friends.

“It’s about an incident that happened to a friend of mine,” said Mr Lynch. “Well, at least that’s what sparked me off. My friends thought I’d gone a bit mad, and I probably had, but I had to write this play. In part, it was for my own catharsis.”

With casting now in its final stages, rehearsals set to begin shortly, and plans to write further plays, Mr Lynch is spending less time on his day job.

“It’s difficult to focus on plumbing once you get into theatre,” he added. “My customers are suffering!”
Posted by robert rubbish at 02:10